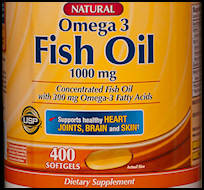 Two recent studies released this year found that Omega-3 fatty acids create a higher risk of prostate cancer in men and have no effect on the cognitive ability  in postmenopausal women.

The Fred Hutchinson Cancer Center  found a 71 percent higher risk for aggressive prostate cancer was linked to higher blood concentration levels of fish-oil supplements and the consumption of fatty fish according to their July 2013 news release.

In a separate study released in September 2013  The Journal of Neurology tested the over 2,000 women of normal cognitive function.  The study found that there was no difference in memory and thinking test scores based on levels of omega-3 fatty acids in the blood.

HealthDay.com in an interview with Neurology’s lead researcher Eric M. Ammann reported that “researchers don’t recommend changing your diet based on their findings.  This was a select group of women who were older and healthy at baseline. It’s one piece of evidence on the effect of omega-3s and cognitive function” according to Ammann and that “Our results are looking at the short-term effect of omega-3s. We don’t know for someone [who has higher levels] for a longer time, if that would have a more gradual, cumulative effect over time.”

Please see the above links for additional information.